Early November
In early November, I start getting excited about the holidays.
I get out my big black book and start planning the Thanksgiving menu and the table setting. I visualize the long, extended table – how will I set it this year? A modern take with bright fall colors? Or vintage white damask and crystal? Shall I polish up my mother’s silver platters and serving dishes, go with the terra cotta, or the mismatch of various porcelain dishes? Here is where the vision begins to fracture, because I never seem able to manifest a single, focused theme. Instead, I wind up with some combination of bright colors, crystal, rose hips or olive branches, and, if the roses are still blooming, which they sometimes are in November, nosegays of the last roses. The fun is in the thinking about all the possibilities.

For the meal, I’m pretty traditional, with a look back at my childhood Thanksgivings that I’ve perpetuated, with some deviation (not usually successful, like the failed chestnut stuffing). Appetizers start with clam dip and chips – I know, very mid-century – crab mousse spread (and I’m only allowed to use fresh cracked Dungeness crab), Chicken or Duck Liver Pate, and candied walnuts, accompanied by champagne. This year it might be Elderberry kirs because my husband and I made Crème de Elderberry from wild elderberries we gathered. 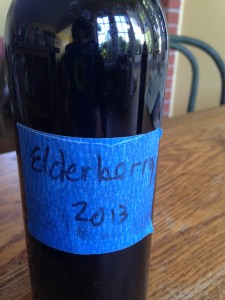 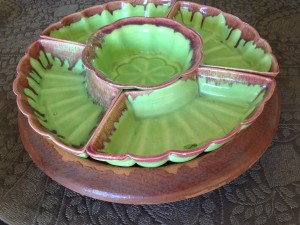 A lazy Susan made more than 60 years ago by my potter father is filled with olives, pickle, celery and carrot sticks, and quince chutney. Center stage is turkey with a cornbread, dried fruit, walnut, and sausage stuffing cooked inside the turkey, mashed potatoes, giblet gravy, peas and onions, garden broccoli, Belgian endive salad, cranberry sauce, followed by a cheese course to make my French son-in-law feel at home, and then dessert.

Dessert is always a bit problematic. Pumpkin pie, made from homemade pumpkin puree is a common choice, as is my special Pumpkin Cheesecake with walnut crust. However, I do love to make the French winter favorite, a rich tart with almonds and walnuts that is kin to a pecan pie, but without the corn syrup. Then there is the apple and quince pie using my own quince with an especially light and flaky crust. Now I have discovered Fresh Cranberry and Walnut Tart. Unbelievably good. It is going to make an appearance on my table this year for sure.

Cranberry Harvest
I had the recent good fortune to go to Wisconsin and see firsthand the cranberry harvest there. Wisconsin, I learned, accounts for more than 60% of the cranberries grown in the United States. 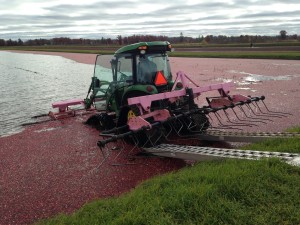 The low-growing, spreading plants lay on acres of land that at harvest time are flooded with about one to two feet of water. The ripe berries float to the top where they are raked, captured in booms, and uploaded to the waiting trucks. 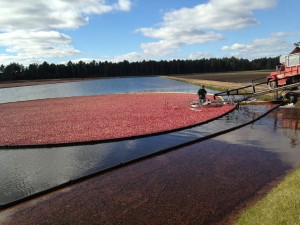 Over several days on my visit I ate cranberries dozens of different ways. Cranberry Crisps, Cranberry-glazed Duck Breast, Cranberry Compote on Salmon Papillotte, and the wonderful Cranberry Walnut Tart. I also attended a terrific cooking class at the L’Ecole de la Maison .Cooking School at the elegant Osthoff Resort on Lake Elkhart, Wisconsin. Having given lots of cooking classes myself, I know how much work goes into them beforehand as well as during the class, if they are to run smoothly, and all the dishes are ready to be served at the proper time, and to also keep 20 plus people busy at a pace that is still fun. Chef Instructor, Scott Baker, who runs the cooking school also heads both the Food and Beverage program at the resort. He is a real pro and it was a pleasure to work with him – and it was also nice not to be in charge!

Recipe
Fresh Cranberry and Walnut Tart
My first bite of this tart tasted like the fresh sour cherry pies of my childhood. Wonderful!

To prepare the crust.
In a large bowl, whisk together the flour, sugar, cinnamon and salt. Using a pastry cutter or two knives, blend the cold butter into the flour mixture until it is the texture of coarse meal. Mix in the egg yolk, and ice water. Mix with your hands until smooth. Form into a ball and chill one hour.
Preheat an oven to 425 degrees F.
Roll the dough out into a round 1/8 inch thick and about 12 inches in diameter, or large enough to fit into a 11-inch tart pan with removable bottom. Chill 30 minutes. Line with foil and add pie weights. Bake for 15 minutes then remove pie weights and let cool.
To prepare filling
In a large bowl, whisk together the eggs, brown sugar, corn syrup, butter, salt and vanilla. Stir in the walnuts and cranberries.
Pour the mixture into the cooled pastry shell, and cover with foil. Bake 40 minutes, then remove the foil and bake another 10 minutes.
Serves 8 to 10
Recipe courtesy of Elm Lake Cranberries, Wisconsin

Christmas Gift List
Gardening and Cooking Gifts
Early November also finds me writing another list in my black book – this one for Christmas gifts. Not surprisingly, I’m going to give presents from my La Vie Rustic products. Lettuce and Chicory Seed Collections for my gardening friends, Sel de Figue and Sel de Abricot for the cooks and cocktail makers, and for the meaty adventurers, Jambon Cru or Roulade DIY Sets.

The blades for my turn-of-the-19th century French sickle are being forged and tempered next week. The California Black Walnut handles are already made and waiting. The sickle will be the special gift for my gardening family.

And, I was thrilled to see that the San Francisco Chronicle Sunday Food + Home Section included La Vie Rustic items as good gift choices in their November 2, 2014 issue. http://www.sfgate.com/food/article/Food-gifts-with-a-certain-je-ne-sais-quoi-5861934.php

Books
I love giving cookbooks for gifts. This year, there are so many to choose from!

Supper at Rancho Gordo, by Steve Sando. Steve took the photos himself, many of them in Mexico. The recipes are a combination of his personal recipes, those collected from is vast array of friends in the food world, from cookbook star Deborah Madison to Taylor Boetticher of the Fatted Calf Charcuterie, with his own commentary. I’m happy to say he asked me for a recipe and I contributed my Caramelized Onion Cassoulet, a vegetarian version of the famous dish made rich with the onions.

French Roots by Jean-Pierre and Denise Lurton Moullé. Jean-Pierre and Denise met on a Berkeley street corner shortly after he had started working at Chez Panisse and she had come to California to promote her family’s Bordeaux wines. They married shortly thereafter and their book recounts their life in food and culture on two continents, with recipes grounded in both sides of the Atlantic. Jean-Pierre became the downstairs chef at Chez Panisse where he remained until his retirement. Denise is obliquely responsible for me having a French son-in-law.
My Paris Kitchen by David Lebovitz. Who doesn’t love David Lebovitz and his wonderful blog? Reading his book is like cooking next to him, the recipes and text infused with his humor, deep knowledge about how and why certain things work – or don’t. And, with the photos, it’s also like mini-tour of David’s Paris. My daughter, Ethel Brennan, did the prop styling for the book – yes, she went to Paris to do the job.

Slanted Door by Charles Phan. Charles Phan is San Francisco’s own. We loved the tiny Slanted Door when it first opened in the Mission District, and we love the vast, expansive space the restaurant occupies on San Francisco Bay in the Ferry Plaza Building. Ethel was the prop stylist for this book too, and there was a tasty perk involved. One day, she and Charles made the marinade for his Barbecued Pork Ribs and she brought the marinade to my house in zip-lock bags. I bought the ribs. So good we never even made it to the table – we just stood around the barbecue, eating, smacking our lips and licking our fingers until the ribs were gone. 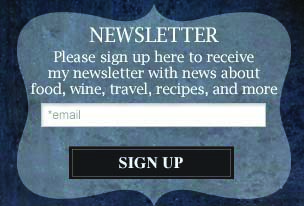 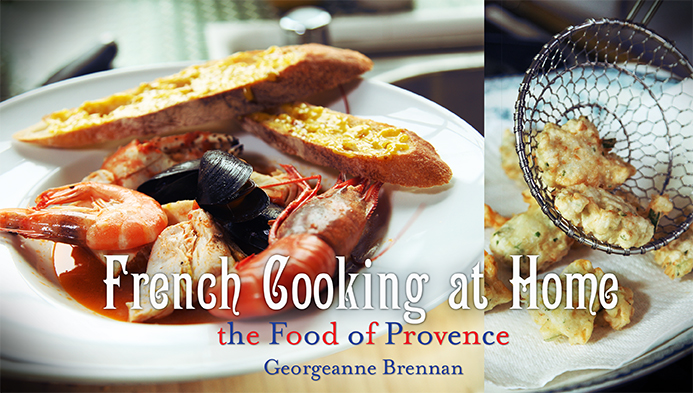